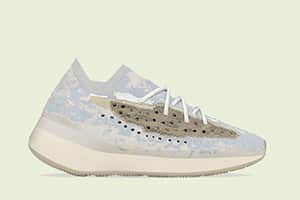 Week by week, the future plans of the Yeezy empire continue to be uncovered, but perhaps the silhouette that’s undoubtedly receiving the most attention is the adidas Yeezy 380. The official debut of its “Blue Oat” iteration is just around the corner, and it’s Fall assortment continues to rapidly build up its roster with more members. And shortly after announcing its glow-in-the-dark Hylte and Calcite makeups, the Kanye-designed sneaker is now providing a first look at its forthcoming “Pepper” colorway. From a color standpoint, they, for the most part, remain on the lighter side of the spectrum as its Primeknit base is arranged with a blend of greyish blue and white hues. However, the midfoot stripe is dyed with a muted taupe tone similar to that of ground black pepper that influenced its moniker. Bottom pieces that house its traditional Boost cushioning is hued in a lighter eggshell tint. Barring any changes, these Yeezys will be dropping in reflective and non-reflective variations in September 2020 likely on adidas.com and other retailers.

For other adidas news, here’s an official look at the upcoming Ultra Boost Football Pack.